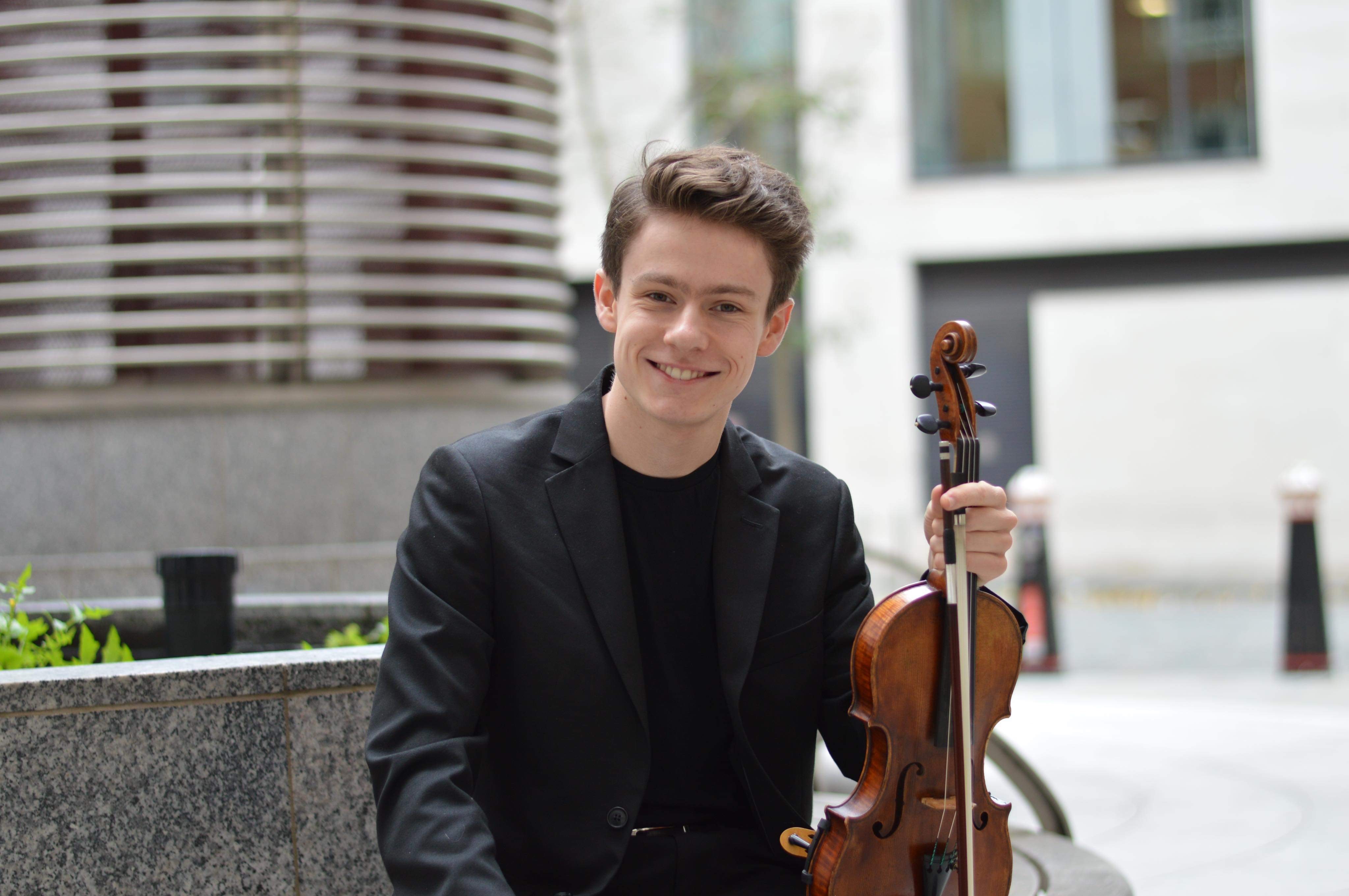 Harry started to play the violin when he was 3 years old with Barbara Parham in Beverley, East Yorkshire with whom he studied for 13 years. During this time, he was accepted into the National Children’s Orchestra, where he received a Leverhulme Scholarship and the opportunity to lead the orchestra at venues such as Colston Hall, The Lighthouse, Poole, and the Royal Festival Hall. He was the winner of the East Coast Young Musician of the Year in 2016, and subsequently was invited to perform ‘Hejre Kati’ with the Hull Philharmonic conducted by Andrew Penny. As a soloist, Harry has performed at Classics in the Park in Hull, Queens College, Cambridge and in many other recitals in his local area.
‍

When Harry was 13, he was given a place in the National Youth Orchestra as the youngest member in 2015, performing at the BBC Proms, Birmingham Symphony Hall and the Young Euro Classic at the Berlin Konzerthaus. Subsequently, Harry completed 5 successive years in the NYO, as well as being Co-Principal Second in 2018, working with conductors such as John Wilson, Marin Alsop and Edward Gardner. During his last two years at school, Harry attended the Junior Academy, studying with Clare Thompson. Since he joined, he led the symphony orchestra, won the chamber music prize in 2018 and participated in the Gary Levinson masterclass. Through the Junior Academy, Harry has featured as soloist with Sounds Baroque at Coram’s Handel Birthday Concert (performing Vivaldi’s ‘La tempesta di mare’concerto) and solo violinist in Junior Academy’s production of Stravinsky’s ‘Soldier’s Tale’ collaborating with dancers and actors from Rambert and RADA. Currently, Harry studies with Professor Rodney Friend at the Royal Academy of Music as a scholar. As a second year, he has part in a Symphony Orchestra projects conducted by John Wilson and a Chamber Orchestra project conducted by Trevor Pinnock.

Additionally, Harry is leader of the Campanella Orchestra, a recently established student-led ensemble conducted by Sam Scheer, which had its first concert in February 2020 performing works by Shostakovich and Tchaikovsky. In July 2020, Harry participated in the Friend’s International Violin Academy and was fortunate to receive tuition from professors including Joel Smirnoff, Yuzuko Horigome and Dong Suk-Kang.  Harry plays an English violin by John K. Empsall and Hill bow both lent to him by the Royal Academy of Music.

Alastair King works mainly as an orchestrator and conductor on Film and TV projects.  These include Downton Abbey, The Martian, Harry Potter and the Half-Blood Prince, Dad’s Army and Doctor Who.  He has also had success as a concert composer including performances by the BBC Philharmonic and the London Symphony Orchestra.  A recent recording of his Concertinfouro for clarinet and strings was recorded by Matthew Hunt and The Chamber Orchestra Of London and is available on i-Tunes. The Amadeus Orchestra has commissioned and given first performances of his orchestral works Irpy and Straight On ’Til Morning and the chamber ensemble piece Dance Marathon $1000 Stake. 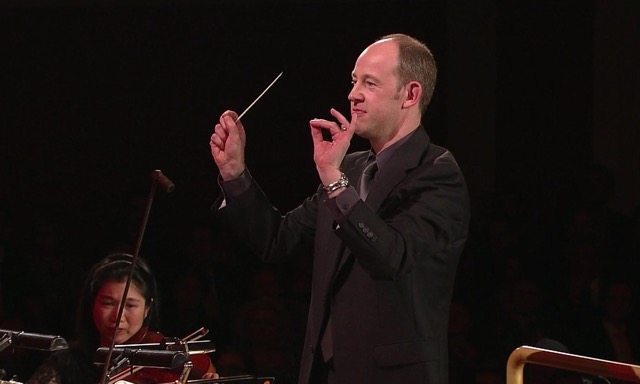 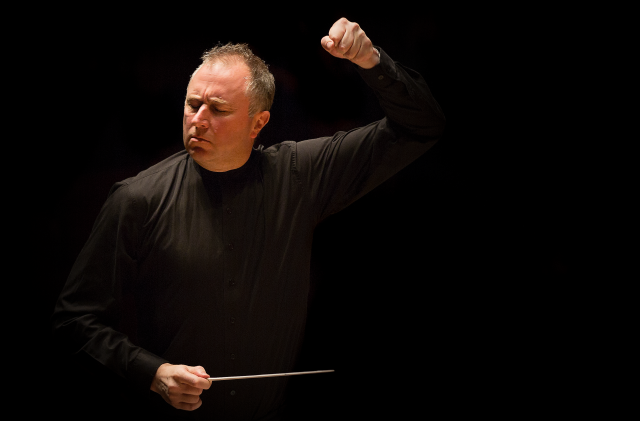 With Victoria Opera North West, Philip made the first complete recording of The Maid of Artois by Balfe.  It was extremely well received by Radio Three’s Saturday morning CD review, being voted as “audience favourite”.  In addition to his recording work, Philip has broadcast on television and radio in the UK and abroad, most recently conducting Mahler’s Second Symphony on BBC Radio 3 in a shared concert with Sir Simon Rattle.  He has commissioned many new works, most notably those composed by Alastair King, and in 2008 gave a world premiere of a reconstructed work by Alan Rawsthorne.

As a freelance conductor, Philip has worked with the Singapore Symphony Orchestra, Bombay Chamber Orchestra, the Symphony Orchestra of India, the Bath Philharmonia, the Pardubice Chamber Orchestra, the Manchester Concert Orchestra, the Bournemouth Symphony Chorus and the Kwa Zulu Natal Symphony Orchestra.  In 2002 Philip took the Amadeus Orchestra to Bombay at the invitation of the British Council and has given over 35 concerts in China. In September of 2009, Philip appeared at the Grosvenor House Hotel alongside Leslie Garratt, Dancers from the Royal
Ballet and Kylie Minogue.  In December 2010 Philip appeared on BBC2 with presenter James May in a programme that encourages lapsed musicians to rekindle their enthusiasm for playing music. Recently, Philip conducted the Moscow TV and Radio State Orchestra and the chorus and soloists from the Kirov Opera in a performance of Mozart’s Requiem in Moscow and was soon invited back for a repeat performance.

As a composer, Philip has had performances of his music in Europe and Asia and has also worked for the BBC as an arranger.  In 2021 his work 'The Gruffalo' for narrator and orchestra was premiered in Cadogan Hall, London. Philip is the recipient of an honorary doctorate for artistic services  given by the President of Ukraine  following his premiere performance in that country of Elgar’s First Symphony.

• Over the Water, with Manchester Camerata 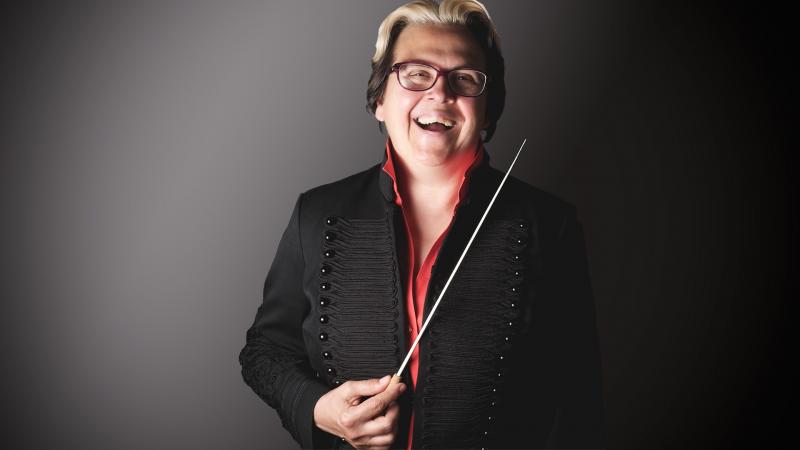 One of the liveliest and most enterprising musical personalities on the British music scene, Cuban American Odaline de la Martinez pursues a busy international career performing a great variety of repertoire ranging from Mozart symphonies to the latest of contemporary music. 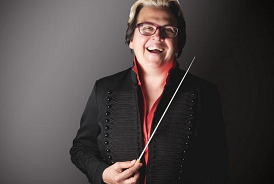 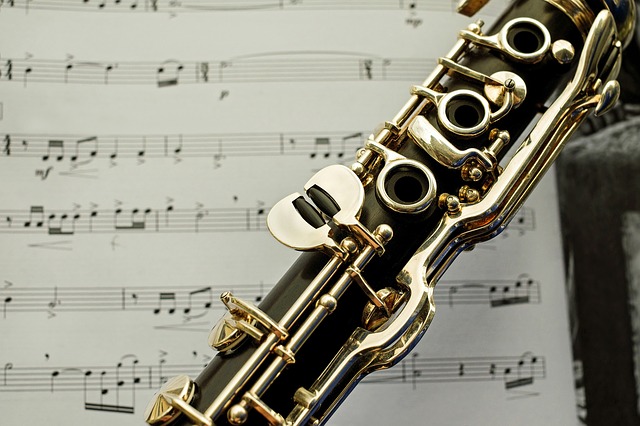 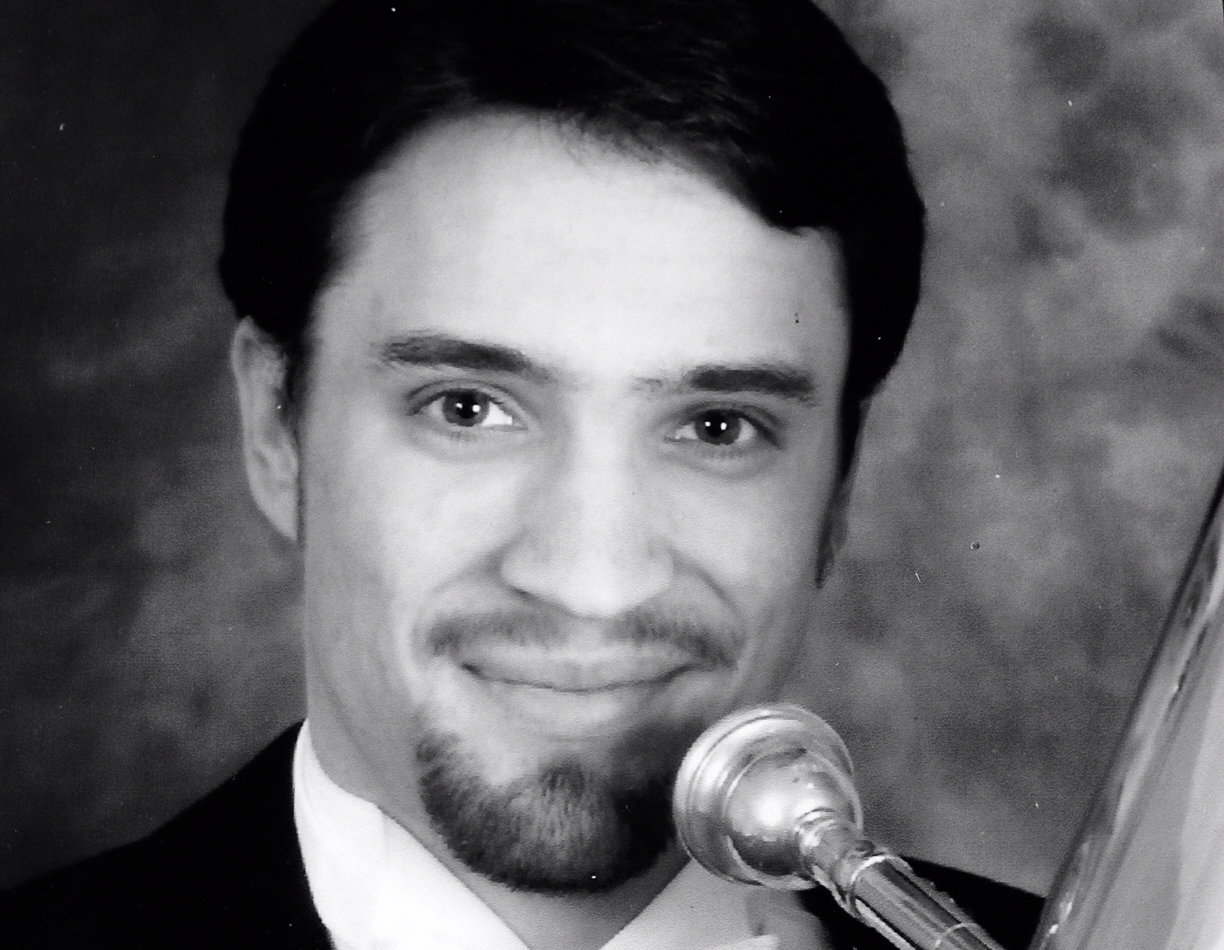 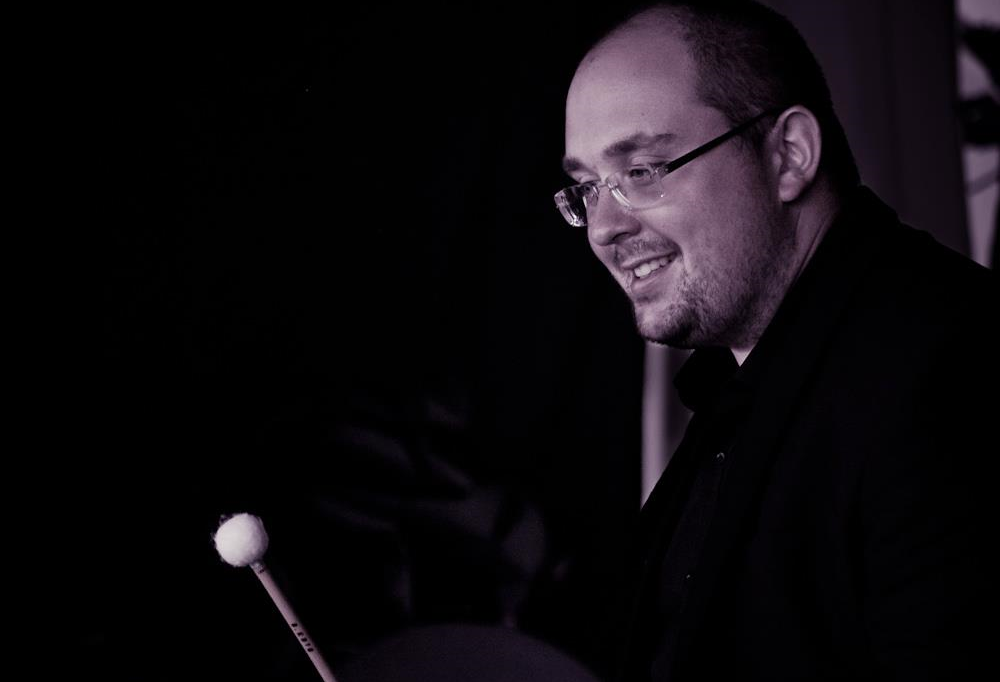 Martinez studied at Tulane University (USA) and the Royal Academy of Music, where she founded her ensemble Lontano in 1976. Martinez was the first woman in history to conduct a BBC Prom at the Royal Albert Hall. With Lontano she has travelled the world

She has received numerous awards including a Marshall Scholarship from the British Government and a Guggenheim Fellowship (USA). Her first opera Sister Aimee: An American Legend (1984) was premiered at Tulane University in 1984, followed by two other productions at the Royal College of Music (1987) and in Marin County College, California (1995). Her second opera Imoinda (from her Slavery Opera Trilogy) (2005-2008), was commissioned by the Caribbean Women Writers’ Alliance (CWWA) with funds from the Heritage Lottery Fund, England. The Crossing also from her Trilogy was commissioned by Tulane University and premiered in New Orleans in April 2013, while there as composer in residence. This work received its UK Premiere in November 2014 at the opening concert of The Fifth London Festival of American Music.

In 2015 Martinez was awarded an Opera America grant to make a video of Imoinda. Odaline de la Martinez is in demand throughout the world both as an orchestra and opera conductor and with her ensemble Lontano. She has
recorded numerous CDs for LORELT, her own record label, as well as Summit, BMI, and Albany Records in the United States, Chandos, Metier and Conifer Classics in the UK and Da Capo in Denmark. As a musician she has acquired a remarkable reputation for her versatile and eclectic vision, and supreme ability to work with others to make the vision a reality.

The diverse activities of performing, conducting and teaching have been constant motivations to Edwin Roxburgh’s principal profession, composing.  As a student he won the Royal Philharmonic Prize (1960) and the Lili Boulanger Trust Award in 1962.  His professional work has been acknowledged in many awards such as the Cobbett Medal  for Services to Chamber Music (1980), a
British Composers’ Award for his Elegy for Ur (2006) and an Elgar Trust Award for a BBC SO commission (2010).  His fellowships range from the Collard Fellowship to his position at the Royal College of Music (where he taught) as Vaughan Williams Fellow in Composition.  Commissions have been constant throughout his life.  They disclose a wide variety of stylistic characteristics from his BBC
Prom commission, Montage to incidental music to The World About Us television series.  Recordings of his music are on NMC, Naxos, Warehouse, Oboe Classics and Metier labels. His music is published by United Music Publishers, Ricordi and
Maecenas. 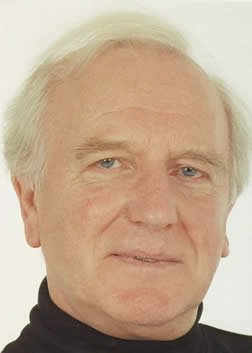 Roxburgh’s work as an instrumentalist began with his appointment as principal oboist of Sadlers’ Wells Opera (now ENO). Subsequently he pursued a distinguished career as a virtuoso, establishing himself as a major interpreter of contemporary repertoire, giving the UK premieres of Berio’s Sequenza V11 and Holliger’s Cardiophonie.  Many of his compositions reflect his research in multiphonics and other extended techniques, which demonstrate his significant contribution to the development of the oboe in the second half of the twentieth century. Whilst a member of the Menuhin Festival Orchestra he was co-author with Goossens of the Menuhin Music Guide ‘The Oboe’.

As a conductor he has premiered a vast number of works, originally with the Twentieth Century Ensemble of London, which he founded, and later with several of the principle orchestras of the UK.  This was reflected in his role as teacher at
the Royal College of Music until 2003, where he created a department of Twentieth Century Performance Study which included annual orchestral concerts of contemporary music which he conducted for BBC broadcasts.  His contention is that all musicians have a responsibility towards the music of their own time and should give as much attention to it as to music of all periods.  This is reflected in his choosing the Renaissance as his special subject when he was a Cambridge student.  In 2014 Boydell & Brewer published his book, Conducting for a New Era. In comparing it to other books on the subject Sir Andrew Davis says in his Introduction that it ’surpasses them all’.

Currently he is a visiting tutor and researcher at the BCU Birmingham Conservatoire. 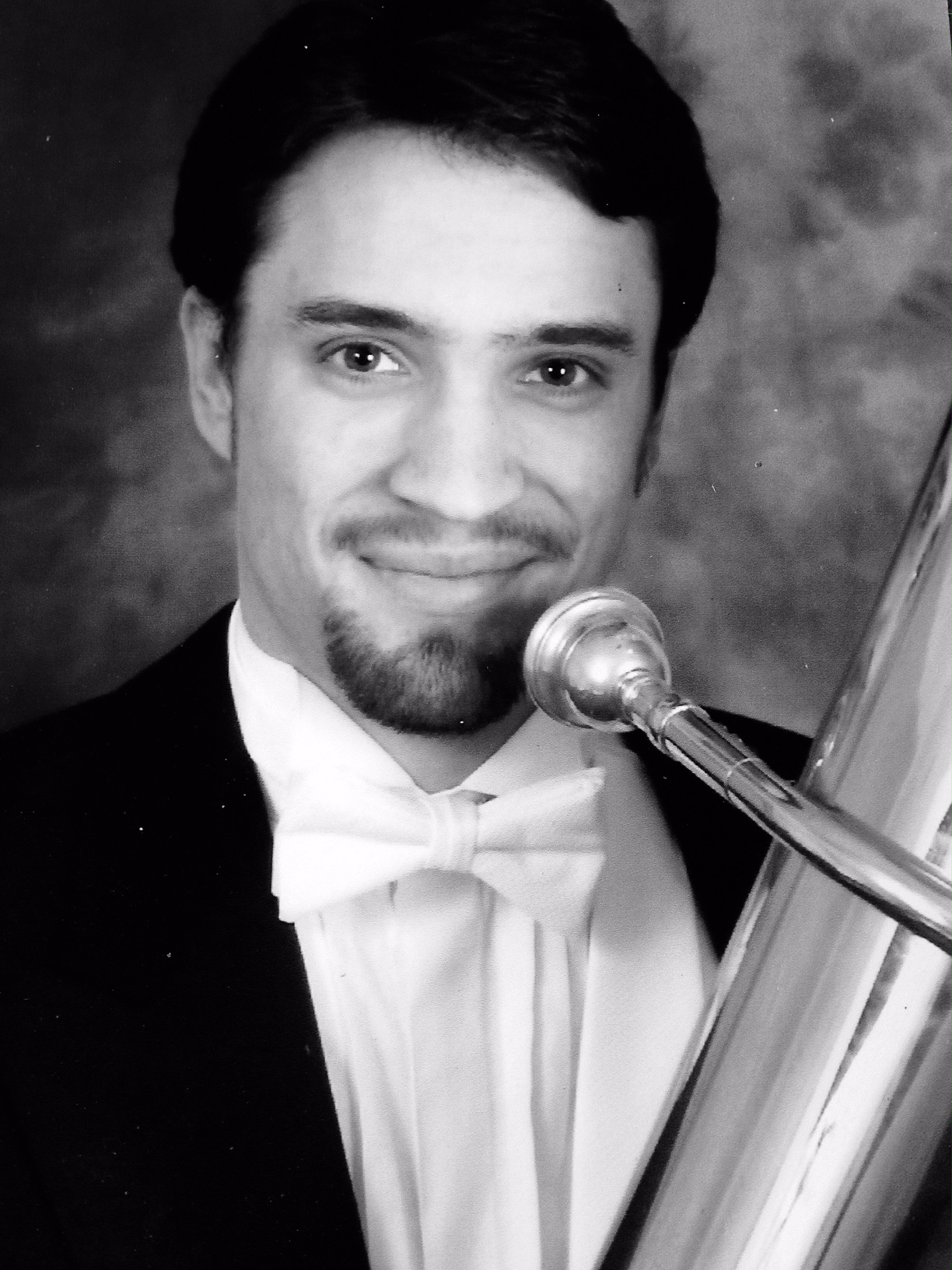 Andrew’s formal music training was at the Royal
Academy of Music and Trinity College of Music. After Graduating he was appointed principal Tuba of the Opera House in Santiago, Chile, and then returned to the UK to build a freelance career.

Andy has played with many of the country's top
orchestras including The Royal Opera House Covent Garden, The Halle, City of Birmingham Symphony Orchestra, Bournemouth Symphony Orchestra and London
Philharmonic Orchestra. He also regularly played for the West End production of Chicago. Andrew has a keen interest in historical performance and plays for the Orchestra of the Age of Enlightenment, appearing on the BBC documentary The Symphony, and with the Gabrieli Consort, including the BBC Proms. He also enjoys the lighter side of music performance having toured the UK and USA
with pop legend Elton John and even dressing up to perform at ‘Shakespeare's Globe’.

Andy performs numerous London solo recitals for the
family Concert series Bach to Baby, giving all ages the chance to hear the ‘virtuosic’ side to the Tuba.

Andy teaches the Tuba and Euphonium students at Bedford School and has delivered master classes at Trinity College of music and The Royal Northern College of Music as well as regularly teaching and coaching at The Royal Academy of Music Junior Department. 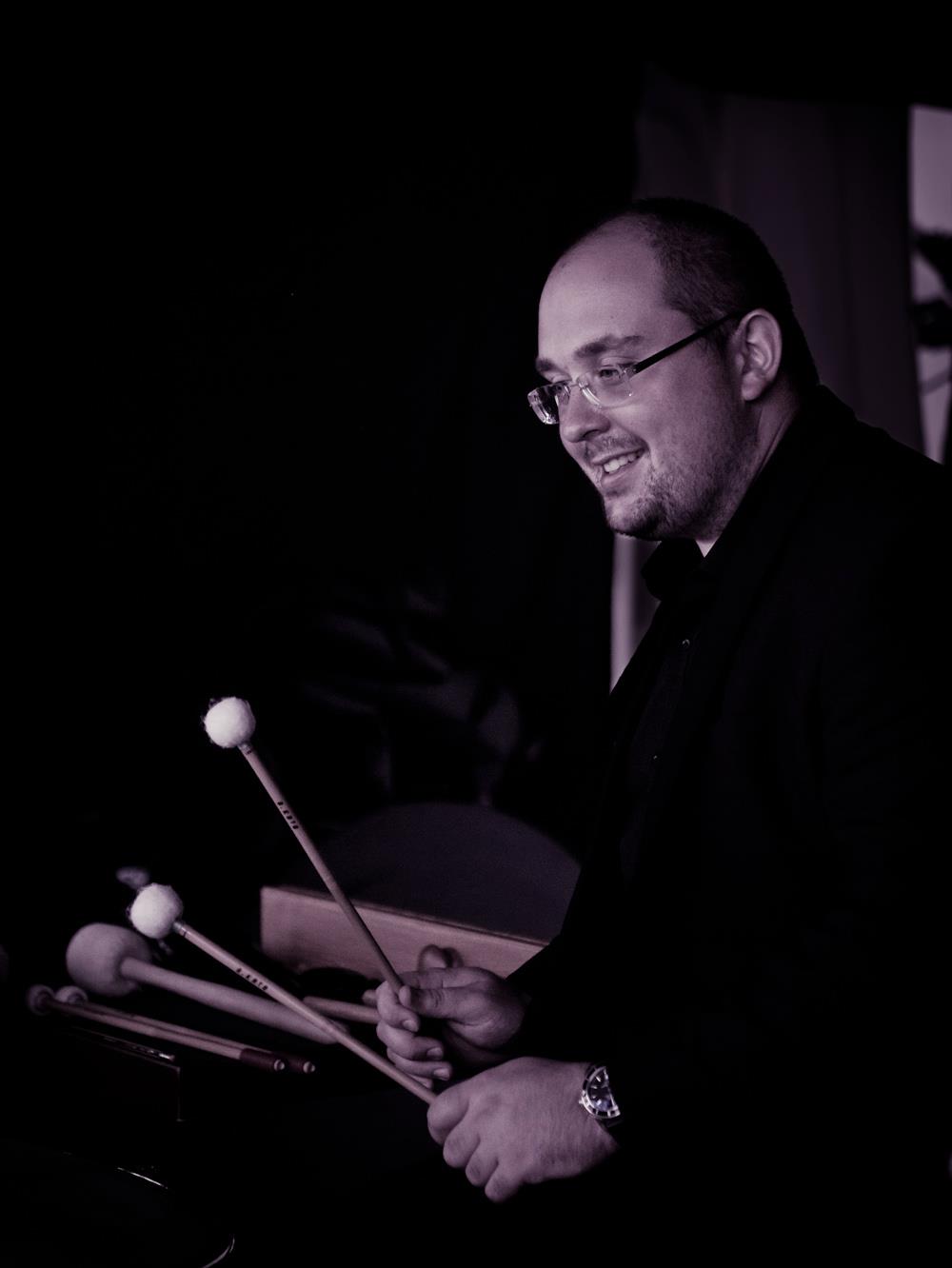 Jonny studied orchestral percussion and timpani at Trinity College of Music and graduated in 2010. Since then he has performed and recorded with some of the UK’s and Europe’s most prestigious orchestras and ensembles such as the English National Opera, Royal Philharmonic Orchestra, The Symphonic Brass of London, Ulster Orchestra and ﻿﻿﻿RTÉ National Symphony Orchestra﻿﻿﻿.

In addition to his classical work he currently holds the percussion chair at the Thursford Christmas Spectacular, has played the marimba on the Lion King UK tour and has performed with the world famous Disney Concert Orchestra.
‍
Jonnys British television work includes being the timpanist on Dave Gorman's Modern Life is Goodish as well as documentaries for the BBC on Benjamin Britten. He has also recorded for the BBC, RTÉ, Ameritz, Naxos, and ﻿Resonsus Classics﻿ labels as well as radio and television ‘jingles’.
‍
Some of Jonnys more diverse work includes performing Club Classics with Judge Jules, the Tafahum World Music Ensemble and recording the soundtrack to the film Neethaane En Ponvasantham with the album alone selling more than 8.5 million copies.

Jonny is passionate about education and offers masterclasses and orchestral coaching to Hertfordshire County Youth Music Ensembles and the ﻿Amadeus Academy Orchestra.